Before: Beeks the Opple Farmer

Opple Provisions and Opples for production

Before: Clakkerz in Gun Towers

Farmer Beeks' Opple Farm is an Opple orchard located just outside of Buzzarton run by Clakkerz. It's currently owned by Beeks the Opple Farmer, and is later taken over by Meagly McGraw.

The farm consists of a large farmhouse, a barn, an opple orchard, opple crusher, and a gatehouse at the entrance.

The farmhouse is the largest building in the farm and contains a number of rooms including a kitchen, bathroom, safe room, bedrooms, and an attic. Beeks and his family are found in this building. Later, Meagly McGraw takes up residence and hides out in the safe room while Stranger fights his gang. The attic is accessible by climbing a rope and is where Beeks has hidden his stash of Moolah. There is a Bolamite nest in the bathroom, implying that the Clakkerz aren't too adept at taking care of this place.

There is a Fuzzle infestation in the barn, with two Clakkerz arguing over who should get rid of them. There is a tightrope connecting the top floor of the barn to the opple crusher across the farm.

The opple trees in the orchard are grown in a row, with ripe opples visible on them. Due to the small number of trees, as well as the many filled crates despite this, it can be assumed that the opple tree is a high-output crop.

Of note is the opple crusher opposite the fuzzle-infested barn, activated by a surged Zappfly. This can be used to kill Clakkerz, and even yields an achievement in some versions of the game. It can play a key role during the fight against McGraw's gang. It's also the junction of the farm's tightropes and connects with the barn, alongside the first floor of the farmhouse.

The Clakkerz working at the farm tend to complain a lot about their work. In addition to this, they are rather rude to Stranger, refusing to even point him in the right direction of Buzzarton and, instead, insulting him or telling him to leave. The residents of the farmhouse (Farmer Beeks and his family) will angrily tell Stranger to leave if he enters the building and, although Beeks becomes friendly when Stranger identifies himself as the security guard, most of the other residents remain unpleasant toward him. The clumsy inhabitants are not defenseless, though; they have guns and are not afraid to use them if Stranger should get violent.

Stranger first encounters the farm while traveling to Buzzarton. He intends to ask the Clackerz at the farm's entrance for directions to Buzzarton, but is mistaken for a security guard coming to pick up Beeks' Moolah. Stranger, if the player so chooses, takes advantage of this and steals the farmer's Moolah.

Sometime later, Meagly McGraw raids the farm (presumably for his love of Opples) and kills all of the Clakkerz living or working there. Stranger has to clear the farm of all outlaws, before McGraw exits the farmhouse safe room to face him. 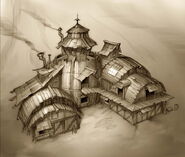 Concept Art of the Opple Farm

Windmill Concept for the Opple Farm

Father Beeks' Opple Farm Sign before it was vandalized by the Outlaws.