Eugene Ius is a clever Clakker who lives in Buzzarton, a town near the Mongo River. He was once held hostage by a gang of Outlaws hunting for treasure in a Grubb temple, but was later rescued by a mysterious Stranger. He designed a computer that operates much of the machinery in Buzzarton.

Eugene Ius is a well-regarded egghead. He is known for being a smart Clakker and being well educated in the language of technology. He is a pupil of Professor Dimble, who taught him everything Eugene knows. He has a laptop that controls all the machinery within Buzzarton.

Eugene Ius was taken hostage by a gang of Outlaws inside the Grubb Temple near Buzzarton. He would be held prisoner and used by the Outlaws as an informant to find the rumored treasure; that's what would have happened before Stranger showed up.

Face to Face with Stranger[]

After Stranger has dealt with all the Outlaws within the temple, he frees Eugene Ius from his makeshift prison cell. Eugene is grateful and, upon his rescue, he told a rather cynical summary of the Grubb legend of the Steef and a demonic Oktigi. He then proceeds to destroy a statue in honor to the Steef in the center of the temple. After the statue fell, Eugene Ius purposely knocked Stranger into the newly formed way out, possibly because he was looking for the rumored treasure of the the temple for himself.

Eugene Ius would later become involved with the bounty of Packrat Palooka. The Outlaw Boss stole his laptop and took control of the power to the city. Palooka wants to reroute the power to power his generators and take control of Buzzarton; Stranger has different plans. Eugene asks Stranger to get his laptop back from those varmints before the city of Buzzarton falls in the hands of the Outlaws.

Eugene Ius is book smart; this leads him to a side of ignorance at times. He is very intelligent, knowing how to work any situation out, except with Outlaws, for his own bidding. He does become an ally though to Stranger right before the bounty hunter moves on to New Yolk City. 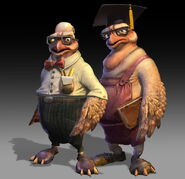