Vulnerable
Elum is a foul-tempered riding beast that considers itself anything but Abe's sidekick. If Elum isn't running away from Abe or being fed then he's slobbering him with affection. In Abe's Oddysee (as well as in New 'n' Tasty) you ride him to the Scrabanian and Paramonian temple. He has great affection for Abe and will follow him wherever he goes, as evident when Elum is told to wait by Abe, he will howl to the sky in sadness.

His design had to capture the characteristics of a lovable yet annoying companion. The skin bump and color maps were based on the wrinkles and folds from rhinos and elephants. While his underbelly was lighter like a dog's, the Elum's back is darker in color from the sun.

It's skin is thick and its colour includes various shades of tan or brown. The Elum moves in a bipedal manner with a horizontal posture. Its back muscles seem to be strong, making it excellent as a mount and pack animal. Its chest and abdominal cavity are wide providing good respiration and food storage. Two curved horns can be seen on top of its head. It's unknown if there is any degree of sexual dimorphism as far as horns and other features are concerned. Its eyes are set wide on the side of its head, as an adaptation to being preyed upon by predators, and thus has a wide field of vision. It has two short double-clawed arms. Its legs are muscular and its toes have three black claws. A vestigial dewclaw is also present. Elum's body ends in a short movable tail used to convey its emotion.

All body features hint at the Elum species being primarily a herbivore. An Elum's favourite food is honey, and will obsessively lap it up if the Elum finds any. The only thing that can stop an Elum, once it's been distracted, is bees, even though it does not find bees lethal.

They are summoned by ringing an Elum-Bell and help Abe traverse the dangers of Scrabania and Paramonia, aiding him in jumping large gaps and running faster to escape enemies.

If an Elum spots honey, it will immediately start eating it and completely ignore Abe. To proceed, the player must use bees to chase Elum off and get it moving again while running away

In the final level of Munch's Oddysee, as well as the Good Ending, at Vykkers Labs there are several butchered Elums in the Vykker Suites. 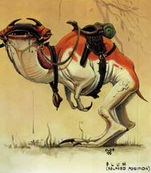