Elboze Freely is an Outlaw found in New Yolk City.  He is actually a fleshy cyborg in a powerful, heavily armored, mechanical body. Elboze and his gang were becoming a serious problem for the people of New Yolk City, tossing explosives everywhere and making endless noise.

It's best to not take Elboze or his gang lightly. With so many explosives and weapons, his gang can be extremely difficult to pass, and Elbose himself can knock out half of the Stranger's health with a swing of his mighty fists. Elboze is battled in a large arena with three air vents under three platforms. He somehow lost his back armor before his fight with the Stranger, making it a major weak point.

Wanted Poster of Elboze Freely found in the Bounty Store

In-game image of Elboze Freely before his Boss Fight 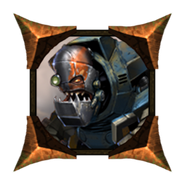 The Achievement of bagging Elboze Freely 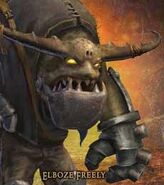 Early Concept Art of Elboze Freely having a more Nailer appearance.
Add a photo to this gallery
Retrieved from "https://oddworld.fandom.com/wiki/Elboze_Freely?oldid=21768"
Community content is available under CC-BY-SA unless otherwise noted.