Doc is, as his name suggests, a doctor. In fact, he's presumably one of the few doctors in Western Mudos. Being a Vykker, a creature of such a shady descent, not many Clakkerz seem to trust him, and thus, he doesn't get many patients. His prices are ridiculously high (perhaps because there aren't a lot of people willing to come to his office to do business).

Doc seems to be the Stranger's only hope if he wants to have a mysterious procedure performed to save his life, and also seems to be the only one who truly knows Stranger's dark secret. Doc presents him an offer for a 20,000 Moolah operation at Gizzard Gulch.

Hung Up To Dry Edit

After the events of bagging the Outlaws within the three Clakker cities, Stranger goes out to save up for the operation. While he is in the Mongo Valley, he is informed that Doc wants to see him. Stranger then heads to Doc's office to find him hanged by the outlaws. It is rumored that Doc once worked for Vykker's Labs. 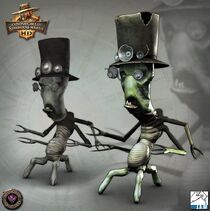 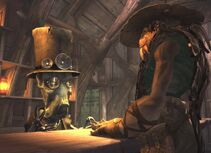 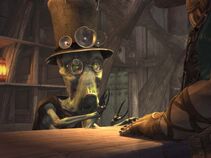 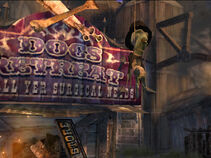 Doc having been hung by D. Caste Raider and his Outlaws

Concept Art for Doc in his Office
Add a photo to this gallery
Retrieved from "https://oddworld.fandom.com/wiki/Doc?oldid=22539"
Community content is available under CC-BY-SA unless otherwise noted.