Lock and Load,Boys! We got some huntin' to do!

D. Caste Raider is an Outlaw who was hired and tipped off by Sekto to capture and interrogate Stranger on where he made apparent the whereabouts of a Steef roaming in the area.

D. Caste Raider is no "stranger" when it comes to doing anyone's dirty work. He and his group of Outlaws are ruthless and would do anything to get that Moolah in their grasps.

After the events of Stranger telling Sekto he knows where to find a Steef, Sekto decides to stir up conflict and calls D. Caste Raider. D. Caste Raider is relaxing within his disgusting hideout when Sekto offers him a deal and tips him off about a bounty hunter in Buzzarton that can get him a Steef Head. With this, D. Castle Raider commands his Outlaw  Minions to ready themselves for a fight and they move towards the Mongo Valley.

After Stranger completes the bounties in the Mongo River area, D. Caste ambushed him and forced him to reveal where the Steef was. Stranger refused and struggled to get free from his bonds, accidentally dropping the surgery papers about his secret in the process. Raider then cut his pants off, revealing that Stranger is a Steef. Stranger is freed by the Grubb Natives and fights D. Caste, who is then burned and killed in his warehouse. It is said that in his wallet, he has a picture of his Sleg. 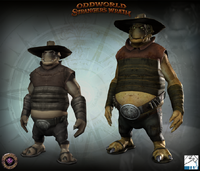 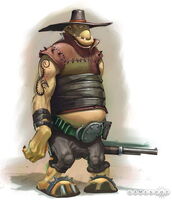 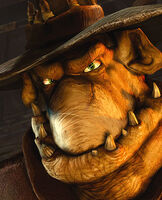 A Close Up at D. Castle Raider's Face

Profile Picture on the Outlaw Card of D. Caste Raider with his rifle 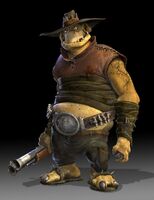 Retrieved from "https://oddworld.fandom.com/wiki/D._Caste_Raider?oldid=21769"
Community content is available under CC-BY-SA unless otherwise noted.