Least Concern
Clakkerz are a sentient chicken-like species, who live in settlements along the Mongo River that greatly resemble frontier towns of the Old West era in the United States. They are one of the main consumers of industry-made products on Mudos. They have little sympathy for the Grubbs, and are only concerned with themselves, the latest gossip, or Moolah. Clakkerz are an extremely ignorant species, out-casting others different from them unless it nets them significant benefits, such as paying Stranger for bounty hunting outlaws. After Stranger defeats Sekto and the Dam is demolished, some of the Clakkerz cities are flooded, though it seems the Clakkerz themselves managed to survive. Upon learning that Stranger is a Steef, they are automatically hostile towards him and attempt to kill the former bounty hunter to collect a bounty on Steef heads during his escape from New Yolk City. Generally, though, Clakkerz have a tendency to panic and hide in their buildings if someone fires a gun within the city limits. While they hide, a voice on a loudspeaker tells the offending party to settle down. After several seconds, they come back outside.

Clakkerz are avians that stand at an average of five to six feet tall. Their physiology resembles a mixture of various types of Earth livestock, with particularly strong resemblances to pigs and chickens. Like chickens, They have a toothless, orange colored beak, feet with three toes, and feathery wings. However, their wings are used more like normal arms, with the feathers at the tips of the wing functioning like fingers, rendering them flightless. Much like pigs, their tails are short and curled, they possess a pair of floppy ears on top of their heads, and adults and adolescents have beige, hairless skin. Their nostrils are closely spaced together and face forward, resembling the flattened tip of a pig's snout. Unlike either animals, however, Clakkerz walk in a plantigrade posture, and their eyes face forward, providing them with binocular vision. Males and females are very similar due to low sexual dimorphism. Females often sport two large breast-like protrusions. Whether or not they are functional milk-bearing breasts is currently unknown and up for debate. Clakkerz apparently reproduce by mating and laying eggs like chickens.

Young Clakkerz have a soft feathery down that usually is white, grey, or more commonly yellow in coloration.

Many Clakkerz, regardless of activity level, become overweight and develop double chins while having pronounced sagging, fatty skin.

The average Clakker is meek and will flee when danger approaches. There are exceptions to this though, as some become bounty hunters and hunt not only the wild game but the sentient species of Mudos. Clakker individuals can vary from the hard-working end of the spectrum (like Opple farmers) to extremely lazy (those in New Yolk City for example). Many develop a sedentary lifestyle, lending to their often borderline obese appearance. 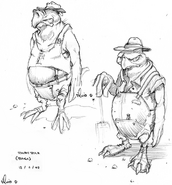 The Clakker Bounty Store Clerk seen talking to Sekto over the phone. 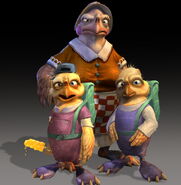