Chippunks are semi-sentient rodents known for their love of imitating and irritating other creatures. They are found in the forested areas of Western Mudos and resemble the real-world chipmunks.

Chippunks are social mammals that nest in small trees. They move via a hopping motion upon four tiny legs. Like the Fuzzle, although they show no outward sign of civilized development, they do at least have some form of intelligence, as they are able to communicate vocally with other races. Unlike Fuzzles however, the Chippunk can form words in English, and the average Chippunk has both a surprisingly large vocabulary and vocal range. They use these twin abilities mostly to hastle larger races, who will go out of their way to try to kill them; Outlaws and Wolvarks in particular find their presence unbearable. Chippunks are considered a type of pest and are endemic to Western Mudos.

When launched, it lures a single enemy to it and gives you the chance to bag it quickly. When fired, the critters put a little green circle on radar. Only a single enemy in the circle can be affected. Be warned, if you've been "spotted" they won't work. This is a Lure variation of ammunition which can be upgraded into the Howler Punk. 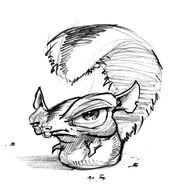