Chauffeur (Also known as Wanda) is Molluck's personal henchman. Before going on the run with Molluck, he used to work as security at RuptureFarms. His relationship with his boss seems to be strained at best as he is shown often to either be aggravating Molluck by rambling about his misfortune, or on the receiving end of the Glukkon's foul temper.

Throughout the game, we see him by Molluck's side, watching as Abe tears through the factories of the Magog Cartel.

The Chauffeur is first seen flying Molluck's Blimp during The Raid on Monsaic, where he and Molluck discuss the Mudokon hideout burning and exacting revenge upon Abe.

After Abe escapes via stealing a Train from Phat Station, Molluck laments the fact that the Mudokon fugitive managed to slip away once again, with The Chauffeur blaming the failure on the blimp and exclaiming his surprise at the fact that it's even still able to fly. After finding out that the train's next stop is Slig Barracks, The Chauffeur suggests picking up a few reinforcements while there to replace the Sligs lost during the raid on the Mudokon hideout. Molluck then blows his assistant's idea off by saying the "buncha' idiots couldn't even stop one stinkin' slave", hurting The Chauffeur, who responds by commenting on how Abe ruined Molluck's plan to retire to a luxury air yacht and that he may still be able to buy a used economy model when they finally catch Abe, further angering the Glukkon.

He is later seen with Molluck, discussing the reason as to why SoulStorm Brew isn't having any effect on Abe. He briefly mentions personally seeing Abe possess his best friends and forcing them to start murdering each other, commenting on how disturbing it was. He then pitches the idea that either Abe is completely immune to the effects of the brew, or that he has access to a supply as it's "past his expiration date".

The pair aren't seen again until after Abe's escape from Necrum. They realize that the train is headed for FeeCo Depot, and if they don't hurry, Molluck will be blamed for whatever happens there too. This is the last time the pair are seen before the ending.

In the good ending, Molluck and The Chauffeur manage to catch up to Abe at SoulStorm Brewery, where they find that both Morguer and Vice President Aslik have both come to the facility as well. Upon discovering the presence of the other Glukkons, Molluck orders The Chauffeur to sneak in and eavesdrop on them.

After successfully breaking into the Brewery, The Chauffeur proceeds to quietly listen in on the Glukkons' meeting with The Brewmaster, finding out how they don't believe in a Mudokon uprising, but that Molluck himself must be orchestrating the "rebellions" in an effort to clear his name. He is then ordered to bribe the Slig teams escorting Aslik and Morguer to turn on their bosses and kill them, which he does after finding out that the Sligs were scammed out of promised overtime and bonuses, causing them to hate their masters. The Chauffeur then notifies Molluck of several conditions that the Sligs have before they join him (consisting of joining Molluck in hiding and getting paid the Moolah they were scammed out of), which he reluctantly accepts, causing The Chauffeur to lead his new allies into the Brewmaster's office and gunning down their former bosses.

With the deaths of the three Glukkons being used as a distraction, Molluck and The Chauffeur disappear, with rumours spreading that they and their new Slig allies had fled to the Yaymans.

In the bad ending, the pair arrive at SoulStorm Brewery just in time to witness Abe's train crash into the facility and cause it to go up in flames. After watching the carnage, Molluck orders The Chauffeur to set course for the Yaymans, as all that awaits them now is a conviction and a firing squad. The Chauffeur then laments that Molluck won't ever be able to afford the luxury airship he had dreamed of or even a low end one. Infuriated by this, Molluck throws The Chauffeur out of the blimp and to his death, ending the game.

The Chauffeur appears to be fiercely loyal to Molluck, despite his tendency to get on the Glukkon's nerves. This is demonstrated by how he stays by Molluck's side after the RuptureFarms uprising and tries his best to help Molluck clear his name, going as far to kill other Glukkons of high status to prevent more blame. Despite this, he has shown to question or talk back to Molluck when he feels necessary.

Despite his loyalty to Molluck though, he seems to respect his fellow Sligs above all else, sorrowfully commenting on the loss of several during the raid on Monsaic and calling Molluck's comments on them harsh. He has even gone to completely ignore Mollucks orders until Molluck promises to look after and pay Aslik and Morguer's Sligs all the Moolah they were owed,

He tends to also ramble on about Molluck' misfortune, commenting on how Molluck won't be able to achieve his retirement dreams on several occasions. In the bad ending, this trait eventually leads to his death.

He is easily identifiable by the RuptureFarms hat he wears throughout the entire game.

Chauffeur talking about his buddy's getting killed by Abe 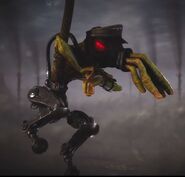 Chauffeur dangling above the brewery

Chauffeur repelling down to the brewery 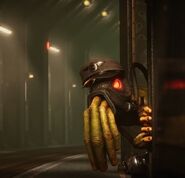 The Chauffeur eavesdropping on Aslik

Chauffeur talking into a walkie-talkie device