The second town where you take Stranger to after you get all the bounties in Gizzard Gulch.

Buzzarton is much bigger than the likes of Gizzard Gulch, with having larger buildings and more technology infused with their architecture. Within the town, there are passageways to these locations that are such as follows:

The city of Buzzarton has a Clakker by the name of Eugene Ius to thank for the construction of the technology-based roots within the town. Eugene Ius controls all the power grid via his laptop, which eventually gets taken by an Outlaw by the name of Packrat Palooka.

Unlike the Clakker town of Gizzard Gulch, Buzzarton has a security force to be messed with. For example, if one were to strike a Clakker two times or more, the Clakkers would retreat to their outposts and start opening fire upon Stranger. With this, there are also various Slegs stationed within the Sewers to munch on anything that tries to sneak past them. Stranger first encounters the likes of Slegs within this city.

This Clakker city also has some environmental factors to it as well. Throughout the duration of Stranger's time within the city, one may experience a couple of sandstorms raging through the city. This is normal and the Clakkerz are used to it, due to the location of the city.

Like the rest of the Clakker towns, Buzzarton has a problem with Outlaws causing trouble. As well as providing one with services from their Bounty Store and General Store, this small industrial town provides one with more locations to explore at one's will. 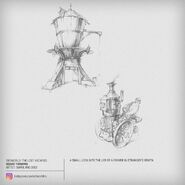 Screenshot of the Bounty Store within the Clakker Town of Buzzarton.