Bonewerkz is the main processing factory for bones to grind them into bone powder, the main ingredient for Soulstorm Brew.

Due to the closure of the meat-processing plant, RuptureFarms, the Glukkons began searching for a new source of bones, which they found to be plentiful in Necrum. The bones that were discovered there are transported to Bonewerkz to be processed.

In terms of its role in the manufacturing of the brew, Bonewerkz was used to grind up bones coming in from various sources and then send them off by train to the Brewery. Also, extra, unused bones could be used for 'explosive bone powder', although this was not seen or even mentioned within the game (Abe's Exoddus). This ended up being used in Munch's Oddysee as Bone Powder Kegs.

There are also several boilers, though why they are there is unknown. They could either be part of the bone powder creation process, or how the factory is powered.

Bonewerkz also creates unique products as well as the bone powder that is used in Soulstorm brew. This was found through unused excerpts from the Bonewerkz Bulletin, which was found on an unused screen in the Bonewerkz level in Abe's Exoddus. These extra products were: Phleg's Bone paste (a toothpaste), Phleg's BoneMeal (an antidiarrheal), Phelg's FossilFingers (some kind of lolipop) and Phleg's BonePowder (a replacement for gunpowder explosives).

Bonewerkz Propaganda is influenced by the one and only Director Phleg, who has created the Bonewerkz Bulletin, information which Abe uses every time and it appears in 4 distinctive places:

Bonewerkz is made up of Annexes, implying the Bonewerkz used to just the main boiler area, and bought out the neighboring building in order to expand the factory. Bonewerkz, unlike Rupture Farms, is made out of bricks, not metal plates. The brick walls are constantly crumbling though, and the building is mainly held up by metal scaffolding found throughout.

Bonewerkz relies on slogs more than the average Magog Cartel company. This is possibly because there are plenty of bones for the slogs to gnaw on. Meat sacks are placed throughout the facility that can be shaken to produce bones, which Abe uses to blow up mines and distract slogs.

Bone powder is in surplus throughout Bonewerkz. It litters the ground like a room full of sugar. It is unknown why the precious bone powder is stored like this.

The main section of Bonewerkz features five main boilers, which Phleg urges his workers not to disturb at the threat of 'down-sizing' them. this is because shutting down all of the boilers causes explosions and functions the site useless.

Bonewerkz was run by Executive Class, rank Big Cheese, Glukkon Director Phleg, who was the "Head Boner" at the facility. As a reputation, he earned it very soon. Started from Pud, Phleg became a very good business glukkon, who earned a lot of money and constructed Bonewerkz as the primary bone processing plant for Soulstorm Brewery.
The Executive Office, where he's encountered, has 4 Levels. The first level is his "office", where you posses him. The second and third levels are two sections where the possessed Phleg must direct a Slig to kill slogs in order to progress. The fourth and final one is essentially the same as the prior two, but a little bit harder this time with 20 Slogs, each round composing of 5-6 Slogs. There is a fail-safe system in place wherein, should Director Phleg die prior to disarming the main gates to SoulStorm Brewery, a Slig will spawn and kill Abe, allowing the player to try again.
Abe managed to shut down Bonewerkz and halt bone processing by shutting off the boilers. Phleg's status is officially unknown, however it's thought that Abe killed him after using him to shut down the main security gates, via chanting/possession.

Bonewerkz as a location is nigh absent in Oddworld: Soulstorm. The only indication that it still exists in Oddworld: Soulstorm is the existence of Bone Powder, a rare item that Abe can use to increase the potency of his crafted Smoke Screens. These bags of Bone Powder have the Bonewerkz logo on them. The only other indication that Bonewerkz exists in the rebooted continuity is the location being marked on the official map included in Abe's Origins, although it appears to be absent on the similar map that Abe uses to guide the escaped Mudokons through Mudos. 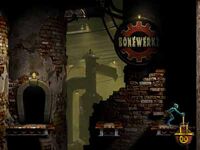 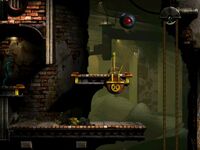 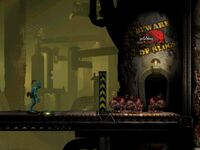 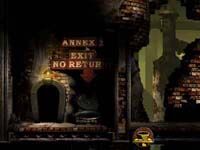 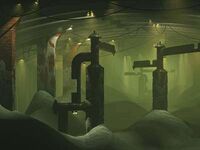 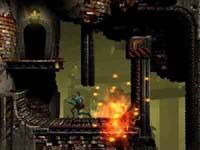