Boilz Booty, the brother of Blisterz Booty, storms into the first town of the game after Stranger has captured Blisterz, and either killed or captured Filthy Hands Floyd and The Looten Duke. He intends on breaking his brother out of jail and incites a battle between The Stranger and himself, though in this battle the numbers are in his favor due to his massive gang getting involved as well.

Boilz Booty is the loving brother of Blisterz Booty; will have his revenge against Stranger and plans to free his poor brother, who was captured by Stranger and put into a cell in the Gizzard Gulch Bounty Store.

Boilz is known for being a master huntsman; is known to have a steady aim. With this, he is a dangerous foe to take on throughout the course of the battle. He is also known for having a huge follower base of Outlaws, making him extra dangerous with each battle in his favor.

Boilz is later informed that his brother has been captured by Stranger in Gizzard Gulch; he swears to break his poor brother out of the rotting jail cell the Clakkerz hold him in. He uses his troops from his gang to march upon Gizzard Gulch towards the Bounty Store. With great rage, he incites the battle within the town to get his brother out of jail and possibly kill Stranger for vengeance for the condition of his brother.

With the fight in progress, the outlaw boss shoots up the town; leaving no surviving Clakkerz remaining outside as he commands his minions to go after Stranger. After he is captured dead or alive, the Clakkers will come out of the buildings and congratulate and thank Stranger for his work of stopping the outlaw. But, Boilz made sure to ruin and destroy the Bounty Store within Gizzard Gulch, forcing the protagonist to go to the next town, Buzzarton. The town is nearly destroyed, as the shops one would have gone  to are now in ashes and rubble; the Clakkerz will always rebuild it.

Boilz almost has the same appearance as his brother; has a bit of a beard and has a brown vest on over his shirt, that has a mark upon it. He carries a shotgun and has a brown wristband on his right hand, with his hat having an arrow through the back of it. He looks quite similar to Blisterz, but has a symbol on the front of his shirt, as opposed to his brother's plain brown shirt.

Boilz can be quite difficult if taken head-on, due to the help of his gang and of course the damage dealt by his massive shotgun. The game advises slinking through the back alleys of town to take out his gang first before going after Boilz himself.

Boilz booty is a very tough boss to take out alive. There is a fuel barrel right outside of the Bounty Store, use it to your advantage by shooting it to kill some of the Outlaw Minions standing close to it. Now, run back towards the walls where some wooden fences stand in your way. You can destroy these fences to reveal a back alley within the town which makes things a lot less difficult. You would hide in the alleyway and lure in members of Boilz's gang with Chippunks and then kill them.

After you kill off the rest of his gang, it is just yourself and Boilz. When confronting him, use a combo of Boombats and Zappflies against the Outlaw to weaken him. When you eventually run out of bats, you can just switch to Thudslugs. Be sure to not have his health too low or one might accidentally kill him. When his health is low, just stick Zappflies and try to take cover behind the buildings and hide within the discovered back alleyways.

Use the same strategy above to kill the Outlaw Minions of his gang. Do not try to capture them alive because one would be wasting their time doing that practice. Once the gang is annihilated, use a combination of Thudslugs and Boombats against Boilz Booty. Take note that these types of live ammo reload very slowly, so it is good to hide behind the buildings often. In the case that one runs out of Boombats, start using Fuzzles against him. 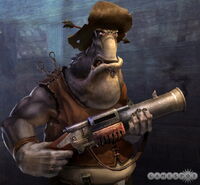 Achievement for taking down Boilz Booty 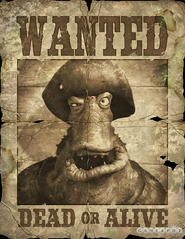 Wanted Poster of Boilz Booty, identical to the one of Blisterz Booty

Boilz Booty's Outlaw Card
Add a photo to this gallery

Retrieved from "https://oddworld.fandom.com/wiki/Boilz_Booty?oldid=22495"
Community content is available under CC-BY-SA unless otherwise noted.