The Blimp is a commonly seen form of transportation on Oddworld for Industrialist races.

The Blimp is a large airship commonly owned by Glukkons and Vykkers. They appear to be a large angular ship-like structure held up by a large inflated balloon of unknown material and several wing-like structures on the sides. The windows and landing platforms of the Blimps are shaped in a certain way to resemble the faces of Glukkons. The Blimp also appears to be controlled by a lone steering wheel like that on an oceanic ship surrounded by a large control panel and leather cushioned seat. Blimps are commonly branded with letters or band, an example being a "V" for Vykkers Labs. Many notable Glukkons posses a Blimp like Molluck, Lulu, Baron, and Aslik.

Some airships are used for combat. During the siege of Last Legs and the attack on the village neighboring the Wolvark Docks, Wolvark forces are delivered using armoured airships. Molluck's airship that he uses in Soulstorm also appears to have rocket launchers and mortars.

A concept of a blimp 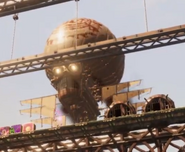 Mollucks blimp yet to appear in Soulstorm

A Blimp flying over the windmill

The inside of Molluck's Blimp