No
Big Face is a Mudokon shaman that Abe met after he fell from a cliff trying to escape RuptureFarms, serving as the deuteragonist of Abe's Oddysee.

Big Face revived Abe and told him to travel to Monsaic Lines, where he will begin a set of trials that would take place in Paramonia and Scrabania. After Abe completed the trials, Big Face rewarded him with two spiritual tattoos which granted him the ability to summon the Mudokon god, Shrykull.

Big Face made a brief appearance in Abe's Exoddus during the opening cutscene, in which he is seen honoring Abe at a ceremony for saving the enslaved Mudokons of RuptureFarms. During the ceremony, Abe farted, which interrupts the ceremony, creating a long period of awkward silence. To break the silence, Big Face starts to laugh, encouraging the audience to join him. He then reassures the embarrassed Abe with a pat on the back, which accidentally knocks Abe off balance and off the ceremonial platform. Abe was instantly put into a coma by the fall. While Abe is in a coma, he was visited by three spirits that told him to save Necrum from destruction by the Glukkons.

Big Face is mentioned in the intro cutscene to Toby's Escape as the one who started the fire that destroyed Rupture Farms (presumably using the storm circle that was used to save Abe). Otherwise he does not appear in Oddworld: Soulstorm, as his role is mostly taken by the Masked Shaman.

Many concepts for the big face and his iconic mask

Concept sketch of Big Face with a rather menacing, beetle-like mask design

Another concept drawing closer to the final Big Face design, but notably featuring two curved tusks on either side of his mask 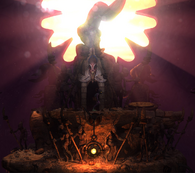 Big Face's mask on a tribute to the Scrabs found at the top of the Scrabanian Temple.

Big Face showing Abe to the centre of the Monsaic Temple where he’ll unlock the full power of the Shrykull
Community content is available under CC-BY-SA unless otherwise noted.
Advertisement