Lorne Lanning
Abe (also known as Stitch Lips among fellow Mudokons) is the first primary protagonist in the Oddworld franchise, the titular protagonist of Abe's Oddysee, Abe's Exoddus and the deuteragonist of Munch's Oddysee. He is a Mudokon, the native race of the continent Mudos. He is recognized by his species as the Messiah of the Mudokons. Despite Abe's skepticism in being the 'chosen one', Abe managed to liberate a large portion of his species from Glukkon oppression. He is also known for liberating any form of life that is being oppressed by unethical businesses such as the Vykkers of Vykker's Labs.

Abe's name had a rocky history, with many iterations. The Art of Oddworld Inhabitants details the surprisingly action-packed story:

Was it destiny that the name "Abe" was chosen? It seems that way when taken into account the instant appeal the name had. Everyone seemed to agree: This poor schmuck was Abe! But the naming process had its ups and downs. Abomen, Abraham Lure, Aben, Prophit, and Monkfish were just some of the names under consideration for Oddworld's first hero. Once decided, it seemed perfect.

However, one day, disaster struck. Word got around the studio that his name was going to be changed to Monkfish! Why? No one knew. Was it for legal reasons? Did Lorne go on a fishing trip? Why? A few of the female staffers conspired to stop this atrocity. No way was he going to be called Monkfish! The word ABE was painted on and cut out of hundreds of pieces of paper. The little papers with the word ABE were placed all over the office for Lorne to see. The men's bathroom, the kitchen, in Lorne's protein shake canister, his office. Under his mouse, his phone, his chair and even in his wallet (hey, it was on his desk)! Anywhere Lorne would look, the word ABE would be staring back! Messages were left on his voicemail... "Abe!"

The gals felt triumphant. They did everything they could to save their beloved Abe. The next day, they found out that prior to the "revolt" Lorne had already decided to keep the name ABE. Destiny be thy master! Finally, the production staff had a name for the character they drew, animated and brought to life.

The name is a reference to Abraham[1] from the Book of Genesis in the Bible. Similar to how Abraham from the Bible received a message from God to be a Father of Faith, Abe receives a message from his ancestors to be the Messiah of the Mudokons, both of which are known for putting an end to slavery.

Abe is distinct in the fact that his skin is a shade of purplish blue, rather than the neutral green tone of his fellow Mudokons. Mudokons are chameleon-like in nature, their skin color reflecting their inner mood. Abe's blue skin is representative of his sadness for his race. His lips were sewn together as a child by his mother Sam, the Mudokon queen, because he often cried and would no doubt be killed for these disturbances.[2] His stitches have since loosened, giving him the ability to speak, and he keeps them because they are so closely related to his identity.

He has one tattoo on his chest and two scars on the backs of his hands. The two Hand Scars on his hands were obtained after he completed his trials at the Scrabanian and Paramonian Nests. Each scar depicts the trial that he went through. The Scrabanian Hand Scar shows of a Scrab and the Paramonian Hand Scar shows of a Paramite. With them, he gained the ability to transform into Shrykull. The chest tattoo was granted to him by the Three Weirdos in order to heal Mudokons sick from SoulStorm Brew.

Abe's appearance has slightly changed with each of the three original games, for example: In the original Oddysee, his ponytail was somewhat curly and he had four fingers. From Exoddus, his ponytail was straight and his eyes were more yellow that they were in Oddysee. In Munch's Oddysee his hand scars are changed to the Modomo and Mudanchee symbols (this design changed may have happened in Exoddus, but there are no scenes with a good view of the back hos his hands). In New N Tasty, Abe recieved the most drastic design yet. His skin was purple and darker, his stitches were longer, he had teeth, even yellow-er eyes and the space in between and around his eyes and nostrils became jade in colour. In Oddworld Soulstorm, an even more drastic design is being made, with larger eyes and a smaller forehead. His ponytail is now more feather-like (perhaps to match native Muds from Munch's Oddysee). His Necrum chest tatoo is now larger, and stretches further down his chest. His skin colour his more like the Classic games. His feet have three toes and he is always barefoot.

Abe is a clumsy, gullible, and naive, but good-hearted and gentle Mudokon. He has a very cheerful or optimistic personality, and is also somewhat desensitized from being a slave, as many horrifying concepts don't upset him. An example would be in Oddworld: Abe's Exoddus, where he encountered a blind Mudokon, and failed to notice his sewn shut eyes, and after accidentally killing him, Abe merely felt embarrassed. In-game, Abe tends to react to accidentally murdering Mudokons with a mere "oops". Abe also laughs whenever he kills a Slig or Glukkon. Despite his flaws, Abe generally is an extremely caring and considerate fellow, eager to help others in need. Despite his ditziness, Abe can at times be a genius. Under his cumbersome, gawky demeanor lies a true mastermind, inconspicuously snooping around high-security facilities and putting corporate big bads out of business, not to mention the fact he saved hundreds of slaves.

Abe began his life, as most slave Mudokons did, in an industrial establishment. Specifically, RuptureFarms, the biggest meat processing plant on Oddworld. Abe grew up more or less satisfied with the way things were, until he discovered the Glukkons in charge of RuptureFarms were faced with rapidly declining sales and planned to use Mudokons as a new kind of meat product. Horrified, Abe attempted to somehow escape from RuptureFarms, hoping to try and save his fellow Mudokon workers along the way. During his escape, Abe discovered his inherent ability to possess other beings and take full control over their bodies. Using this new power to his advantage, Abe was able to free himself from RuptureFarms.

Abe soon learned of an aspect of Oddworld with which he was completely unfamiliar; the native side. He learned of the way things used to be, and was directed by Big Face, the Shaman Mudokon, to the harsh regions of Paramonia and Scrabania, where he faced the sacred Paramites and Scrabs.

Surviving these trials, Abe was endowed with two mystical tattoos, one on each hand. They granted him the power to channel an ancient Mudokon God, the Shrykull. With this power, Abe returned to RuptureFarms, rescued all 99 Mudokon workers (299 in the remake), and destroyed the factory.

Not long after, Abe learned of Necrum, an ancient Mudokon tribal burial ground, from a trio of tormented spirits known as the Three Weirdos. The burial chambers were being dug up by greedy Glukkon Industrialists, who sought to use the bones to make SoulStorm Brew, as is revealed in the opening cutscene. To make matters worse, blinded Mudokon workers were being used to dig up the bones. The Weirdos pleaded with Abe to try and save the burial grounds so that the spirits could rest in peace. In response, Abe set off on a trek to try and save the burial grounds, with a group of Mudokon followers in-tow.

Eventually, after crossing a vast desert, they reached the Glukkon establishment. Soon after, Abe discovered SoulStorm Brew, an addictive drink concoction that made anyone who drank it utterly addicted (coining the phrase: "One is too many. A million is not enough."). Abe traveled to the Mudanchee and Mudomo burial vaults to free the spirits there while gaining the power to heal Mudokons addicted to the foul brew.

Abe moved onto FeeCo Depot, a major train station. From here, he traveled to and shut down Bonewerkz and Slig Barracks, before eventually shutting down FeeCo Depot itself.

Abe was soon on his way to the infamous SoulStorm Brewery, where SoulStorm Brew was concocted. He sabotaged brew production by possessing various Glukkons and freeing Mudokons, before Abe ultimately blew up the factory. On his own, Abe managed to liberate all three hundred Mudokons from the facilities.

Some time later, Abe encounters the Almighty Raisin and learns about a Gabbit named Latamire Munch. The plan is to find Munch and rescue him from the labs where he is being held captive by entering the Big Well, and lauching up to Vykkers Labs. But Munch has already been freed by the Fuzzles, and they meet up to continue their journey. With Munch, he gathers a fortune for a pitifully poor Glukkon called Lulu, which they then used to win the last can of Gabbiar (a canned cuisine made of 150 Gabbit eggs), from Vykkers Labs. During Abe and Munch's collaboration, countless lives were saved, among Mudokons and Fuzzles alike. Abe is now an advocate of the Mudokon resistance. He is viewed as a hero by his peers and as a terrorist by the Industrialists. At the end of their journey, Munch thanks Abe for helping him get the Gabbiar, which surprises Abe since, up until then, he had never been thanked for his deeds.

Abe and an Elum in the forests of Paramonia

Big Face and Abe celebrating the destruction of Rupture Farms

Abe, in fear as he is cornered by a Scrab

Abe looking scared before getting his hand scar

Abe after getting his Shrykull power

Abe before entering the Scrabanian Temple

The Paramite Hand Scar as it appears in New 'n' Tasty.

The Scrab Hand Scar as it appears in New 'n' Tasty. 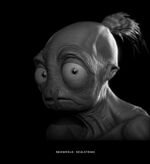 Renders of Abe by Tom Bramall

Retrieved from "https://oddworld.fandom.com/wiki/Abe?oldid=24020"
Community content is available under CC-BY-SA unless otherwise noted.